DISCLAIMER:  This is not an official communication from the town of Westport or any communication related to the RTM.  It is an editorial by Christine Meiers Schatz, who happens to be a member of the RTM. 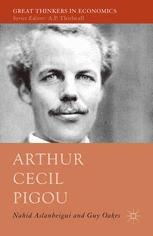 Pigovian taxes are named after British economist Arthur C. Pigou, who expounded upon their merits in his 1920 book "The Economics of Welfare."[/caption]

As an elected official, I'm acutely aware of the need to reduce local tax burdens - this year more than ever due to changes in federal tax law.  But I can't shake an idea I've had for a new, local "Pigovian" personal property tax on firearms.

Maybe you can help me figure out whether it is an idea worth pursuing.

Pigovian taxes correct inefficient market outcomes and are favored even by conservative Republican economists.  By taxing an activity/ownership that has societal costs, a Pigovian tax shifts some of this "external" cost (an "externality") back on to the property owner.  In addition, the revenue raised could fund measures designed to mitigate these social costs.

Westport residents own over 6,741 registered firearms and the related externalities have made recent headlines.  For example, Westport Police Chief Foti Koskinas encouraged the town to proactively address residents' mental health in light of the number of registered firearms.  At a fundraiser in December he explained,  "I'm not anti-Second Amendment; people have the right to defend themselves.  But we need to have a conversation in town about mental illness.  It's gun common sense."

Likewise, the number of registered firearms has been mentioned as one of many reasons for the town to hire School Resource Officers to protect students in Westport Public Schools.  Some economists have even estimated that the average annual marginal societal cost of gun ownership is up to $600 per household.

Assuming an average $500 assessed value for each of the 6,741 registered firearms and using last year's mill rate, the tax would raise over $56,000 each year for local safety and mental health initiatives.

The tax might be the first of its kind, however, which raises some questions:

Would the tax be Constitutional?

I think it might be.  According to the Connecticut Department of Revenue Services, "nothing in taxing firearms, in any way, infringes upon an individual's constitutional right to bear arms."  Generally, taxes need only be justified by a rational governmental purpose.  This is a low bar and - especially with respect to Constitutional issues - a much lower bar than what would be applied to a regulation regarding gun ownership.  In fact, a Washington State Supreme Court recently deemed constitutional a different type of local tax on firearms.

The tax would be set at the mill rate, and at 16.86 that equates to a tax of of less than $9 for a $500 gun.  This doesn't seem confiscatory or excessive.   The $9 is meant to fund local social programs as a complement to gun ownership - and NOT meant to limit access to firearms in any way.

Does the town have the right to levy a personal property tax on guns?

Under C.G.S. Secs. 203-204, Connecticut towns have the right to tax personal property subject to a long list of exceptions. There doesn't seem to be any sort of exception related to firearms.

Would the tax lead to more unregistered firearms?

This is an important question and I'm not sure of the answer.  It does appear, however, that the state of Connecticut requires sellers to report all firearm sales to local law enforcement.

Is Westport willing to burden the potential risks of being an innovator here?

It is possible that the tax might be challenged, though perhaps a large law firm might donate legal services for its defense (any volunteers?).  If not, legal costs might exceed revenue for at least the first year.

It has also been suggested to me that Westport might receive national attention if it is the first to implement a personal property tax on firearms, and that's not the kind of attention that the town wants or needs.

What do you think?

For now, I'm happy putting the idea out into the universe.  Even if this tax isn't right for Westport - which I suspect will be the general consensus - maybe someday it will be implemented in another town that is willing to take the risk.