RTM Meeting Recap - May 7th and May 8th

There was no public comment, few questions, and very little discussion at the RTM meetings on Monday, May 7th and Tuesday, May 8th.  Given the lack of material to report on, I've added some additional details learned from interviews, reports, and subsequent events.

On Monday, the RTM addressed every agenda item except for the Education budget, which it approved on Tuesday along with the total town budget of $207,493,035.  Compared to fiscal year 2017-2018, the total budget approved by the RTM increased by 1.03%.

Following the meeting, the town adjusted the budget downwards by approximately $556,410, for a total budget of $206,936,368 - a 0.76% increase compared to fiscal year 2017-2018.  The adjustments consisted of an additional $67,000 in anticipated costs related to contract negotiations with the Department of Public Works, which was offset by a reduction of $623,410 for settlements with the Police Department, Fire Department, and general town (non-education) employees.

Revenues also surpassed the town's projections.  The state provided us with an unanticipated $800,000, and the town collected an additional $1.2 million in taxes.  The better-than expected tax revenue included the repayment of deferred taxes from home sale proceeds.

Note that we will not be able to rely on the reserve indefinitely to keep the mill rate flat - either taxes will need to increase, our total budget will need to decrease, our grand list and revenues will need to continue to grow, or some combination of these occurrences will have to take place.  The town is moving in the right direction, though.  The $3.6 million draw down of the reserve is smaller than the $4.4 million, $4.2 million, $5.34 million, and $4.25 million used to keep the mill rate flat in fiscal years 2014-2015 through 2017-2018, respectively.  In addition, our grand list growth this year of 1.5% exceeds our peer towns.  For example, the grand lists in Darien, Norwalk, New Canaan, Wilton, Weston, and Fairfield grew by approximately 0.9%, 0.5%, 0.6%, 0.6%, 0.6% and 0.3%, respectively.  According to town Finance Director Gary Conrad, the improvement in Westport's grand list this year is due in part to increased commercial development, residential renovations, and the continued recovery of home values near the shore since Hurricane Sandy.

Sheri Gordon presented the budget on behalf of the Board of Finance, and I've included a video of her presentation.  Please note there's a button on the lower right of the video that will make it full screen - otherwise the slides are too small to read.

My agenda summary post (available here) covers some of the important points made by Ms. Gordon; this was possible because town Finance Director Gary Conrad used the same slide deck at our RTM Finance Committee meeting.  I've highlighted three additional graphics from the presentation below. 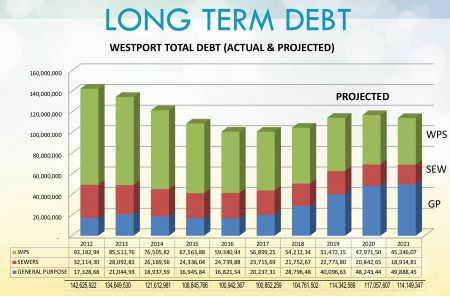 The first relates to long term debt (click on the slide to enlarge).  The debt for general purpose town activities has been increasing since 2016 which, according to Ms. Gordon, was due to projects like the senior center and the library.  The total town long term debt is projected to increase further by approximately $13 million between now and 2020, with this increase coming from more general purpose town debt.  In committee, Mr. Conrad explained that this additional projected debt was for "catch up" projects that the town had deferred.  All such expenditures would be subject to appropriation requests to the Board of Finance and RTM. As you can see in the slide, the school-related debt has decreased dramatically since 2012.  This trend is projected to continue at a slower pace.

The second slide relates to town (non-education) employee headcount, which declined from 2009 to 2013 and has stayed relatively stable since then.  According to the U.S. Census Bureau, the population in the Town of Westport is estimated to have grown by over 1,000 people - up 5.5% - between 2010 and 2016.  The third slide shows the precipitous decline in state revenue since 2013 - a reality we're all aware of but that nevertheless makes for an interesting graph. 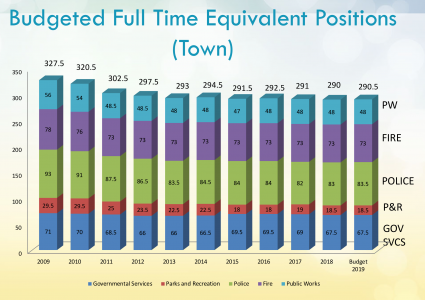 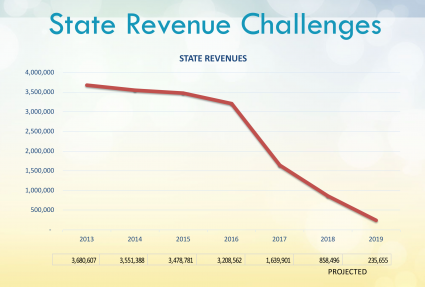 Ms. Gordon also went through each department's budget percentage increases compared to fiscal year 2017-2018, which are depicted in the chart below. 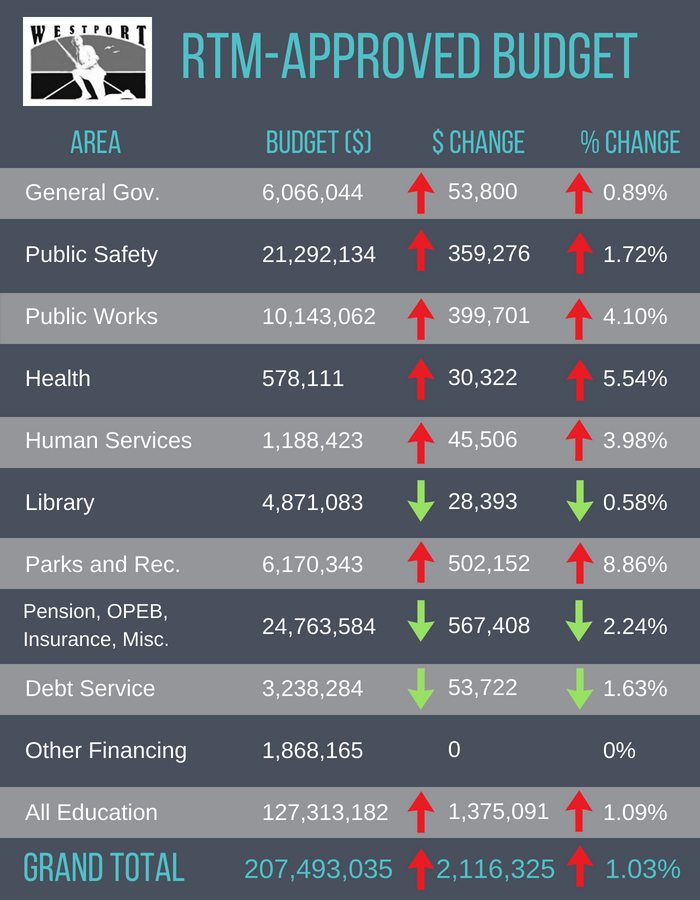 On Tuesday, the RTM unanimously approved the Board of Education budget, which I described in more detail in my last post (available here).  At the RTM meeting, School Director of Operations Elio Longo explained how the proposed budget, as compared to fiscal year 2017-2018 went from over a 4% increase to an increase of 1.57%.  These successful efforts included renegotiation of workers' compensation insurance and transportation contracts, and the switch of all Westport Public School employees to the state health insurance plan.  Based on the approved budget, in the next few weeks the Board of Education will also need to find ways to reduce expenses by $972,000.

RTM member Jimmy Izzo cast the sole dissenting vote related to the education budget on the separate education line item for aid to private and parochial schools.  He did so after questioning whether the aid was mandated by the state.  Mr. Longo replied that it is.  To my knowledge, this line item includes transportation expenses for Westport students to private schools in Westport, like Greens Farms Academy and the Pierrepont School.

Finally, while not mentioned at the RTM meeting, here's some notable budget-related information regarding two departments:

The draft ordinance was sponsored by the RTM Environment Committee, which is chaired by Wendy Batteau and includes Diane Cady, Andrew Colabella, Nicole Klein, Ellen Lautenberg, Matthew Mandell, Carla Rea, Lauren Soloff, and Cathy Talmadge.  The ordinance has been revised slightly from the version in the agenda and now reads as follows:

An Ordinance Prohibiting the Use of Artificial Turf Containing Synthetic Infill in the Town of Westport, Connecticut.

Purpose.  To protect the health, safety and general welfare of Westport's children and all residents, ecosystems, and natural resources, the use of artificial turf containing synthetic infill manufactured from recycled or virgin materials including but not limited to ambient and cryogenic crumb rubber, coated crumb rubber, ethylene propylene diene monomer granules, thermoplastic elastomer granules, and recycled footwear, (categorized as "hazardous waste" and "special handling waste") is prohibited as follows:

Ms. Batteau explained that the Environment Committee had been speaking about the proposed ordinance at its meetings and with town officials for several years, but the need for the ordinance has become clear for numerous reasons, including the following:

Artificial turf with crumb rubber infill is banned in several countries, the state of California, New York City, the North Shore of Long Island, the town of Hamden, and the city of Hartford among other places.  Ms. Batteau explained that the proposed ordinance is modeled after the Hartford ban.

AGENDA ITEM #8:  The ratification of the collective bargaining agreement between the Town of Westport and the Westport Municipal Employees Union and appropriation of the amounts required under that agreement 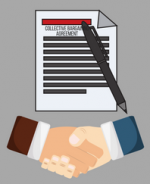 At the meeting, Mr. Chetcuti explained that the parties were able to forego attorneys because it was a "simple negotiation" regarding wages and employee contributions to the health plan.  He also described the collective bargaining agreement, which will cover the 4-year period from July 1, 2017 through June 30, 2021.  Employees will get wage increases of 2.5% each fiscal year, which is in line with other union contracts in nearby communities.  The employees will also contribute 11%, 12%, 13%, and 14% to the cost of health insurance for the fiscal years 2017-2018, 2018-2019, 2019-2020, and 2020-2021, respectively.

RTM member Kristan Hamlin cross-examined Mr. Chetcuti to elicit information regarding employee parity.  Unlike WMEU members or other municipal employees, Police Department and Fire Department employees receive time and a half for hours spent training or providing training to other employees.  Mr. Chetcuti said that the provisions providing for this additional pay likely originated in much older contracts and that he'd take a closer look at them in future negotiations with those departments.

The RTM voted unanimously to ratify the agreement and approve the appropriations.

AGENDA ITEM #9:  The appropriation of $150,000 (and authorization of the related bonds/notes) to purchase a combination garbage and recycling truck 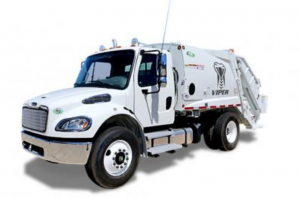 Jennifer Fava, the Director of Parks and Recreation, provided the RTM with background information regarding her department's responsibility for collecting trash and recycling from around 230 receptacles throughout the parks, beaches, athletic fields, and the downtown area.  Their current collection truck is over sixteen years old with an irreparably broken compacting unit.  The new combination garbage and recycling truck will reduce the number of employee crews needed to complete the collection runs from two to one.

Ms. Fava explained that if the town outsourced this function instead:  (1) the total cost would be significantly more expensive, even when compared to the cost of the new truck and labor expenses (2) the outside company would not change bags or pick up trash from the surrounding area, (3) the outside company wouldn't have the same flexibility to do additional runs when necessary and during certain events, and (4) the town wouldn't be able to use to truck for clean-up after severe weather events; outsourcing this function would be a significant expense as well.

AGENDA ITEM #10:  The appropriation of $950,000 (and authorization of the related bonds/notes) to bury utility lines and reconstruct the Elm Street roadway with new sidewalks and lighting

Peter Ratkiewich, Director of Public Works, explained to the RTM that the requested appropriation would be used for new underground utilities, sidewalks, curbs, street lighting and roadway on Elm Street.  The town must complete this work as part of its land swap agreement with local developer David Waldman, who plans to build a new, two-story retail and residential building at 35 Elm Street.  As part of the deal, the town will receive .15449 acres across the road at 36 Elm Street to be used for parking in return for a .15395-acre property in the Baldwin Lot at 35 Elm Street.

RTM member Matthew Mandell took the podium to say that the work would benefit the community by completing the triangle downtown.  According to Mr. Mandell, this upgrade will make the area more vibrant.

AGENDA ITEM #11:  The appropriation of $360,000 (and authorization of the related bonds/notes) for the repair of a headwall and 3 culverts under Canal Road

As you may recall and can read about here, funds for the design of this headwall were appropriated by the RTM in January 2018.

Mr. Ratkiewich described the work involved in repairing the eroded culverts and headwall, which he estimates will cost approximately $360,000.  In response to a question by RTM member Kristan Hamlin, he explained that the job is currently out to bid and that his cost estimate was based on a database of all work that the town has done or contracted out.  RTM member Peter Gold asked Mr. Ratkiewich to identify the lower-priority project in the capital forecast that the Canal Road project would replace.  Mr. Ratkiewich said that the repair of the Willow Brook culvert on Weston Road would be postponed for a few years.

The RTM voted unanimously to approve the appropriation.  The construction will begin after the school year is complete.