Disclaimer: What's below is my interpretation of the meeting and not an official communication from the RTM or from the Town of Westport.

The RTM approved a $40,000 appropriation for the NOVAtime payroll system by a 33-1 vote.  Currently, the hours for 200 regular and 350 seasonal town employees are recorded manually in different ways, depending on the department.  Then, someone from each department manually inputs each employee's hours into the town's payroll system.   The NOVAtime system will automate all payroll-related functions for these employees through its web-based system.   Employees will be able to “clock in” and "clock out" with computers, smart phones, or "biometrics" like their handprint, and this information will feed automatically into the town's finance/payroll software.  Collectively, this automation will save approximately 35 hours of town-employee work each week.  Assuming that the number of Westport employees using the NOVAtime platform stays the same, the yearly cost for the NOVAtime services for the subsequent four years of the five-year contract would be $19,135.

Director of Human Resources Ralph Chetcuti explained the additional benefits of the NOVAtime system, which include the following:

Town employees in the Fire and Police Departments will continue to use their own systems.  According to Mr. Chetcuti, these departments need different systems than other town employees because they staff employees and account for hours in a different way.

The Westport News article regarding the meeting is here and the WestportNow.com article regarding this agenda item is here, though note that the vote was not unanimous as reported in the articles.  Jack Klinge, an RTM member from district seven, asked if the payroll system would be able to replace an employee.  When Mr. Chetcuti did not have an answer.  Mr. Klinge explained that, based on what he had heard, "I don't see a great sense of urgency to do this right now" and that he was inclined to wait a few more months to see if the Board of Education could adopt the system as well.

Mr. Klinge made a very good point and I was inclined to delay the vote or vote no when first considering the NOVAtime proposal as well.

I can't speak for any other RTM members, but I ultimately voted in favor of the appropriation because:

The RTM approved Westport's participation in the Recycling Interlocal Agreement by a vote of 32-0 with one abstention from District 5 representative Greg Kraut.

In 1989, Westport entered into a similar interlocal recycling agreement, which will expire this year.  As compared to this agreement, the new draft agreement does not include a minimum population requirement.  According to Steve Edwards, former Director of Public Works, the partnering towns did not want current interlocal members or potential members to be automatically disqualified if their population falls below the 400,000 resident threshold.

Mr. Edwards explained the financial benefits of the interlocal agreement, which include:

Some potential downsides to the contract are that (1) Westport's ability to withdraw early is limited if the withdrawl would cause the interlocal to breach an existing contract with a third party, and (2) while part of the interlocal, Westport is bound by the contracts executed by the interlocal's decision-making committee.  Mr. Edwards explained that, with respect to the former concern, Westport could still withdraw if it finds another town to take its place or at the conclusion of the contract with the third party.  With respect to the latter concern, Westport is part of the decision-making committee, and committee votes are weighted based on a town's quantity of recyclables.

The other participating towns listed in the draft agreement are Bridgeport, East Haven, Easton, Fairfield, Milford, Monroe, Orange, Stratford, and Woodbridge.  According to Mr. Edwards, the goal is to have all participating parties execute the contract in the next couple months so that the interlocal can extend the term of the contract providing $20 per ton for recyclables.

The RTM appointed Jeff Wieser as Westport's alternative representative for the Western Connecticut Council of Governments ("WESTcog") by a unanimous, 33-0 vote. 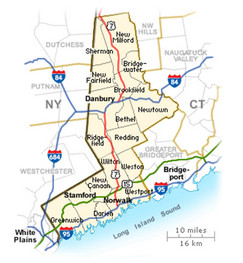 As provided in the Westport Code of Ordinances, the First Selectman represents our town in WESTcog and the RTM appoints an alternate representative from its members.  During the prior two-year term, the RTM appointed Eileen Flug, who was then the moderator of the RTM.  Current RTM moderator Velma Heller did not want to be nominated for the position because her teaching schedule conflicts with the WESTcog meetings.

In complimenting First Selectman Marpe, Mr. Wieser joked that he is perfectly capable of fulfilling the position of alternate representative given that, like everything else in town, Jim Marpe never misses the WESTcog meetings.

Disclaimer: This post has been my interpretation of the meeting and not an official communication from the RTM. You can view the official recording of the entire meeting here.